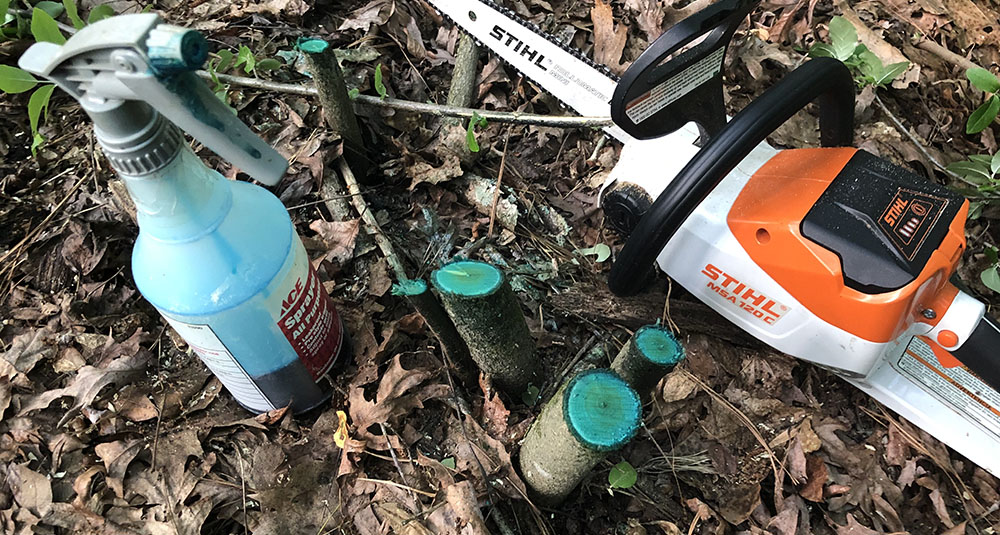 In a previous article— 5 Herbicides Every Deer Steward Should Know — I covered what I believe to be five of the most common herbicides used by habitat managers, with a specific focus on those used for creating and maintaining food plots. That article included glyphosate, which is often used to kill all vegetation in a specific area prior to replanting; grass-specific herbicides clethodim and sethoxydim; the broadleaf-specific herbicide 2,4-D; and a herbicide that kills both grasses and some broadleaf species without harming clover, 2,4-DB (Butyrac).

In this article, I want to dive a little deeper and cover a few more herbicides that may be beneficial to your habitat improvement efforts, particularly if you are working with forested areas or old fields. These herbicides can be used to control woody encroachment in fields and roadsides, kill large hardwood trees for forest stand improvement, or to establish and maintain old field or early successional habitat. Before we dive into the next three herbicides you need to know, let’s take a look at a few important terms I’ll refer to when describing each of these products.

Selective Herbicides – Selective herbicides kill certain types of plants but not others. For example, the herbicide clethodim kills grasses but does not harm broadleaf plants. The herbicide 2,4-D does just the opposite, killing broadleaf weeds but leaving grasses unscathed.

Residual Effect – Some herbicides remain in the soil and continue to be active for several days, weeks, or even months after application. While this residual effect can be good for controlling weeds in a food plot, it may limit your options for crop rotation, depending on the length of time the herbicide remains active in the soil. For example, if you used the pre-emergence herbicide imazethapyr, you should not plant oats, grain sorghum, or sunflowers at that site for 18 months after application. Always check the herbicide label for recropping restrictions.

For a more in-depth look at important herbicide terms, check out our article The Deer Steward’s Guide to Herbicide Terms.

With these common terms in mind, let’s take a look at my next three herbicide picks.

Triclopyr is a versatile selective herbicide that controls both broadleaf and woody plants while leaving grasses and conifers unharmed. It can be used as a foliar application to prevent woody encroachment in fields and along road edges, as a basal bark treatment to control woody vegetation, as well as in hack/girdle-and-squirt applications to kill woody vegetation up to large hardwood trees.

Triclopyr is not soil active, meaning it has no residual effect. It can be found under a variety of trade names, with the most common being Garlon and Remedy.

Imazapyr is a non-selective herbicide that controls a broad range of weeds, brush, vines and deciduous trees. Like triclopyr, imazapyr can be used in a variety of methods, including broadcast, basal bark and hack/girdle-and-squirt. Unlike triclopyr, however, imazapyr is soil active and can persist in the soil for long periods of time, so care must be taken when using the herbicide to ensure it doesn’t impact off-target species. Its persistence, along with its slow-acting nature, makes it very effective at killing large trees. Imazapyr is often found under the trade names Arsenal, Chopper and Stalker.

Check out the video below to see how imazapyr and triclopyr can be mixed to make a very effective cocktail for killing hardwood trees by the girdle-and-squirt method.

Imazapic is a selective herbicide that kills certain annual and perennial broadleaf weeds and grasses. It is commonly used in prairie restorations because it is effective at killing fescue, bahiagrass, bermudagrass, Johnsongrass and others, while not harming native warm-season grasses like bluestem, Indiangrass and switchgrass. It also does not harm a long list of native forbs/wildflowers. Like imazapyr, imazapic does have a residual effect, suppressing new seedling germination, which can aid in the ability to establish native prairie vegetation without persistent competition from non-native, cool-season grasses. Imazapic is sold under the trade names Plateau and Cadre, with Plateau being labeled for wildlife, pasture and rangeland, while Cadre is only labeled for use in peanut fields.

Herbicides can play an important role in your overall habitat management efforts. These three common herbicides, along with the previous five we covered, should handle most of your food plot and habitat improvement needs. Choosing a herbicide always begins with knowing exactly what weeds you are up against, so identification is key. It is best to consult with a professional when possible, and always follow the recommended rates and application directions on the herbicide label.

Buck Tagged From The Ground