Deer Mange Looks Bad. Is It A Concern for Deer Populations? 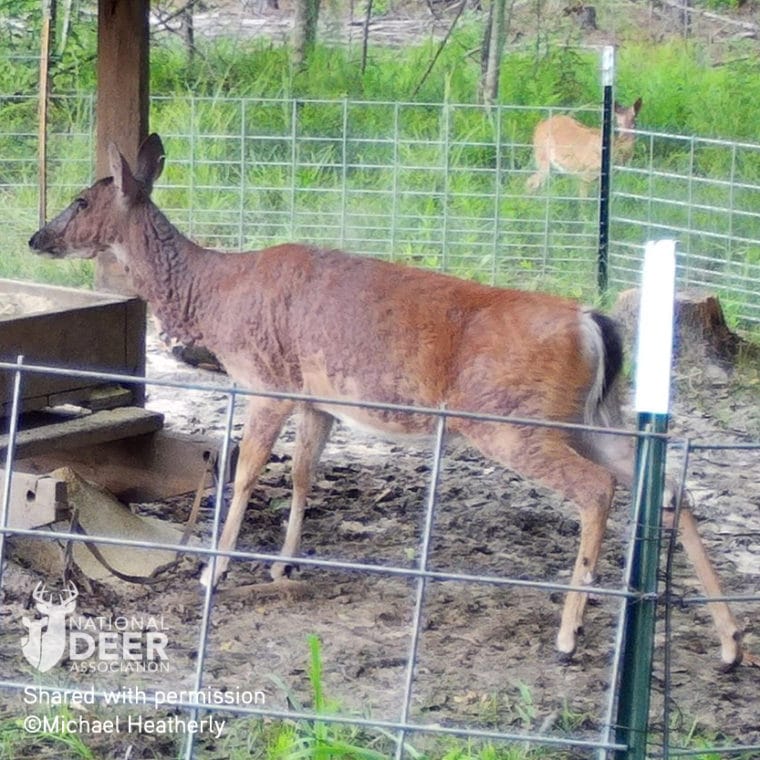 Got the itch for deer season? If not, this recent photo of a doe with mange ought to get you scratching.

The photo above, taken on July 1 in Alabama, shows a classic case of deer mange, which is caused by a species of mite that lives only on whitetails, Demodex odocoilei. These mites are somewhat common on deer, but only on rare occasions does an infestation become “clinical,” meaning you can see outward signs like this doe has. These include hair loss and a thickening or wrinkling of the skin, especially on the neck and head. If you could examine this deer up close, you would see lots of small pustules or pus-filled lesions, and each of these lesions is actually a hair follicle or skin gland infested with countless, microscopic Demodex mites.

Demodex mites can be transmitted deer-to-deer in bedding areas, other frequently used sites, or by close physical contact. But again, most whitetails with normal immune suppression can harbor these parasites without ever developing severe “clinical” mange like you see in this photo. So, according to the Field Manual of Wildlife Diseases in the Southeastern United States, deer mange is a problem only for a few rare individuals. It is not a herd problem.

In 2013, the Southeastern Cooperative Wildlife Disease Study at the University of Georgia conducted a review of all the cases of deer mange they’d diagnosed from 1975 through 2012, which included 37 whitetails. Interestingly, half of those cases were from the last five years of the study period: 2008 through 2012. Does this mean deer mange is on the rise? That’s not clear. SCWDS acknowledged this increase could have been the result of better surveillance or other factors.

As always, it’s a good idea to report sightings and photos of obviously sick deer to your state wildlife agency’s deer biologist.

In the study, most deer with documented cases of mange were in good to excellent condition otherwise. Those in poor condition had other health issues, so it’s unclear whether mange alone has ever caused the death of a deer. It’s likely that some other issue – such as nutritional stress or another disease – makes an individual deer more susceptible to mange.

Clinical deer mange is a skin issue, so if you kill a deer with mange that looks healthy below skin-level, it is in theory safe to consume the venison. However, because a serious case of mange is often accompanied by other health problems, we don’t recommend it.

As always, it’s a good idea to report sightings and photos of obviously sick deer to your state wildlife agency’s deer biologist.

Thanks to NDA member Michael Heatherly for sharing the photo with us, taken on his friend Josh Kirkland’s hunting land in Alabama.

Note: The cattle fencing panels you see in the photo are intended to keep feral hogs away from this feeder. Deer can jump the fence, but hogs can’t.

The post Deer Mange Looks Bad. Is It A Concern for Deer Populations? appeared first on National Deer Association.