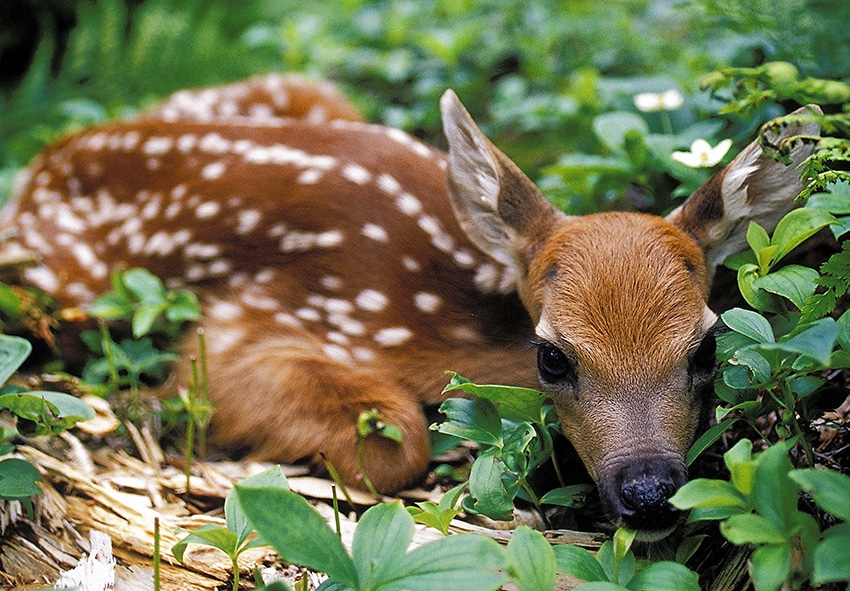 It seems like every spring I see a post on social media by someone with a fawn they “rescued” because they found it lying alone in the grass, seemingly frightened. I politely inform them that although their heart is in the right place, they are likely doing more harm than good. Here are some valuable pieces of information to consider this spring which will help you better understand why you shouldn’t move that fawn.

Why Are They Hiding?

When fawns are born, the mother takes several steps to carefully prepare the fawn for concealment from predators. First, the mother will take her time to clean the fawn to remove her own scent, but more importantly, she will actually consume the afterbirth, not only to reduce the risk of predation, but to recycle nutrients that are necessary for milk production. Within hours of birth, a fawn will begin to test its ability to walk, ultimately wobbling awkwardly along behind their mother on their way to the best available hiding spot. Once a safe distance away from the birthing spot, the fawn will instinctually lie down in cover. This all happens within about ten hours of birth. Quite the fast learner!

This is often where the misconception that fawns are “abandoned” comes in. Unless you see the mother injured or dead nearby, fawns lying comfortably in the vegetation are quite the opposite of abandoned. Hiding is the primary survival mechanism of fawns until they are able to run away. The mother will leave the immediate area so as to not attract predators while she feeds so that she can receive the nutrition necessary for optimal milk production. She will then return multiple times a day to feed her newborn, calling for them as she approaches the general area.

So, remember, this is natural behavior, and while you may not see the mother, she is almost always nearby. Feel free to snap a quick photo, but be sure to keep your distance, don’t linger too long, and if the fawn gets up and runs away, leave the area immediately.

Hiding in cover is just one of the pieces of the puzzle in fawn survival. Contrary to popular belief, fawns are actually not born odorless, in fact, the unique scent of each individual fawn is actually how the mother identifies her own, which is a pretty cool trait that reinforces the importance of the whitetail’s sense of smell. Twins and triplets are also hidden separately to increase their survival probability. By handling deer fawns, you are potentially spreading or introducing scent that may pique the curiosity of a predator and draw them into the area. 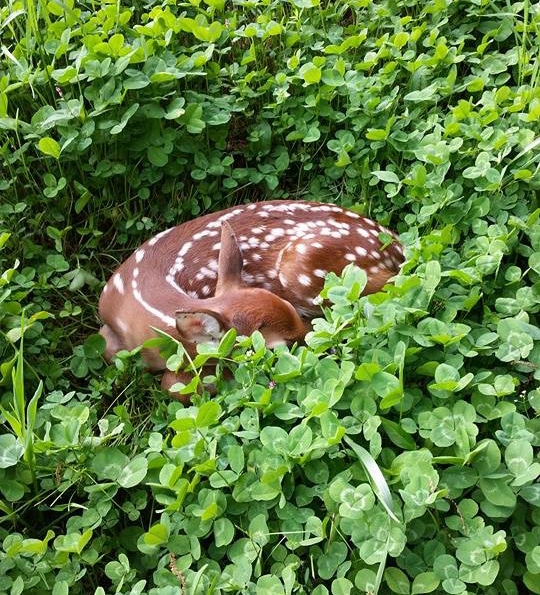 To even further their hide-and-seek abilities, fawns rely on their over 300 unique white spots as a highly effective form of camouflage. Even more impressive, when a fawn senses danger they will reduce their heart rate by nearly three times! This renders them almost entirely undetectable to a meandering predator that is unaware of their presence. I sure wish I could control my heart rate like that! These things combined are why fawns prefer to hide as a survival strategy, and why they may appear to be injured or forgotten.

When Do They Stop Hiding?

The early stages of development are extremely important to the overall survival of a fawn, so ensuring their safety by leaving them alone and not causing additional stress to the fawn or it’s mother is crucial. Fawns rely heavily on their mothers for the first several weeks, but you might be surprised how quickly they grow. For the first two weeks, a fawn’s diet consists entirely of milk, but it is at this point that their weight typically doubles from when they were born and they begin implementing forage. In just another two weeks, their weight typically triples!

This period of time is critical in their development, as the fawn gradually weans from its mother and learns how to forage and interact with the herd, obtaining a growing grasp of the social hierarchy. Fawns can be fully weaned from their mothers in as little as 10 weeks! It is during this time that the fawn will work those leg muscles, ultimately becoming strong enough to escape predators rather than hide.

There are many more reasons as to why most fawns are not abandoned and the vast majority of them are backed by extensive research. I grew up in the suburbs, and it was quite common to see fawns bedded in my yard or in my parents’ garden, and the mother was typically watching us from the small patch of woods next to our house. As a kid I had always heard that you shouldn’t move fawns, but it wasn’t until I learned the science behind it that I understood why I couldn’t just pick up the abandoned fawn and take it home. I hope this provides some insight as to why fawns hide, what makes it effective, and how that period of hiding helps transform them into running and jumping machines.

It is perfectly acceptable to take a quick picture of a fawn if you come across one, but even though research shows that the mother will not reject it if you pick it up, it is much better if you simply leave it alone. Enjoy the nice weather and the wildlife viewing opportunities it provides, but remember, don’t move that fawn!