Hunting is a unique activity as it is often done in solitude. There are no bleachers full of screaming fans watching our every move. Often it is just one person alone in a remote setting. This is actually why I love hunting. I am a loner by nature and when I am hunting I am most at peace.

The solitude that hunting affords also comes with some negatives. Often there are no forms of proof that what happened actually did indeed happen. Critics have a field day as they downplay the success of others while boasting of their own lesser accomplishments. I am sure the same things happen in other sports but in those venues the spectators can easily sift through the rubbish as they sort fact from fiction. In hunting it is too easy for an under-achiever to downplay the success of others or even make untrue allegations.

I have been around long enough to learn that the more successful one becomes at anything, the more critics they will attract. It doesn’t matter if we are talking about deer hunting, business, sports, or anything else. I guess it is human nature for some people to build themselves up by tearing others down. 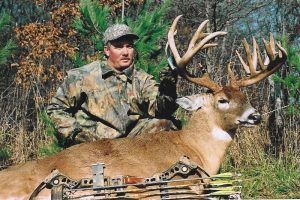 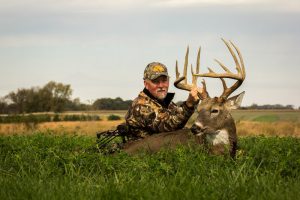 My four biggest bucks average 198 1/2″ and came from four different properties. One came from my own property and the other three came from places where I simply knocked on doors for permission. None came from leased land.

In the deer hunting world I constantly hear other hunters criticizing some of the bigger names in the industry for their success. They claim that these other hunters’ success is primarily due to the properties that they have to hunt. This criticism is particularly pointed towards those celebrity hunters from southern Iowa. The common mantra seems to be these lucky devils are only successful because of where they live and the properties that they have. If the critics only had access to these same properties they too would be shooting giant bucks. Well let me burst a few bubbles … that thought process is simply garbage.

Success in deer hunting is very similar to success in anything else; it comes to those who work the hardest and have the right mindset. If you look at the celebrity hunters in southern Iowa, almost none of them grew up there. They simply moved to that region because it afforded them the very best chance to realize their dreams. Deer hunting success did not come to these folks because of their hunting property; instead their passion and drive led them to acquire the best hunting properties they could. Their critics on the other hand found it easier to find excuses for staying wherever it was they found themselves instead of chasing their dreams with a limitless passion.

I have often said that “we can make excuses or we can find solutions”. That is a choice that every single one of us has made countless times in our lives. We can’t blame it on anyone else. Each one of us finds ourselves where we are today because of choices we alone made. I personally have made some good choices in my life but I have also made plenty of bad ones. With that said, I harbor no ill-will for those who have reached levels of success far above my own. Show me a hater and I will show you someone whose life will never become what it could be with a better attitude.

At the recent ATA show I had the privilege of speaking with literally hundreds of other whitetail fanatics. During one of those conversations a gentleman seemed to be insinuating that my success as a deer hunter was largely because of the property that I have to hunt. In all fairness, my own property is easily the best whitetail property that I have ever hunted on. It was not always that way however. When I started working on this property over 25 years ago, one could have hunted the property for an entire season and not saw a single deer! It was only through my efforts that my property became the whitetail paradise that it is today. In summary, I made this property what it is today through my own work and efforts and in turn that has led to some of my hunting success.

Let’s take this conversation another step forward. This gentleman with whom I had the conversation at ATA really has no idea where, when or how I hunt. He has never been to my property and in fact does not even live in the same state as I do. He made assumptions about me based on things he probably heard or assumed. He thinks my hunting success is solely or at least primarily due to my one small 120-acre property. I didn’t even bother to enlighten him that my four biggest bucks all came from different properties. One of those came from my own farm but the other three all came from properties where I simply had permission to hunt. None came from leased ground.

So what is the point in discussing this topic? Well as the years slip by I find more and more young hunters looking to me for advice and there is some solid gold in this blog post. You will ultimately end up where your own choices take you, both in life and as a deer hunter. Define your goals and then decide the best path to reach them. You can make excuses or you can find solutions; it’s your choice. Nobody ever made it big in the hunting industry because of the properties they have to hunt. Instead it was choices they made along the way that ultimately put them on those properties. Are you going to be one of those who lives their life criticizing the success of others as a way to pacify yourself for your shortcomings? Or will you become one of those success stories that the under-achievers envy? Next season starts now! 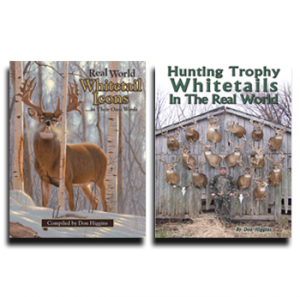 #17: CAN’T WE ALL JUST GET ALONG? with Steve Bartylla | Deer Talk Now Podcast