What to Feed Deer in Winter | And What NOT to Feed! 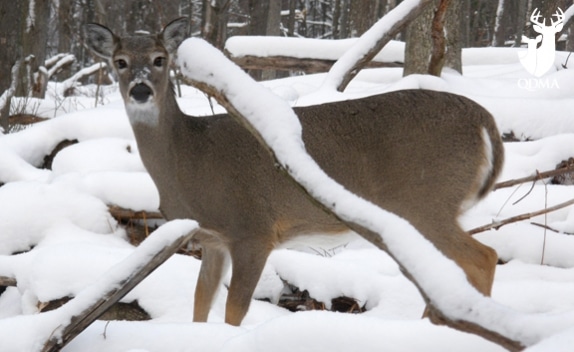 The 30 most critical days for winter deer survival have a name, and it is March.

Deer have a limited supply of fat reserves to carry them through winter. In fact, research at the University of New Hampshire showed that a healthy doe begins winter with a 90-day fat supply. This ticking clock begins winding down in March and is the reason why weather patterns in this month often play the biggest role in deer mortality.

If March comes in like a lion and eats the lamb for breakfast, can we do anything to give struggling deer a survival kit to help more of them see April?

What to Feed Deer in Winter

The best option is to give them more of the winter foods they are already adapted to eating: winter browse. This includes buds and twigs of woody plants. Introducing new foods in the middle of winter, especially in high quantities all of a sudden, can actually be more harmful to deer than not feeding them at all.

In my home state of Georgia, we don’t often see big problems with winter deer mortality. So I talked to our Education & Outreach Director, Kip Adams, who is from Pennsylvania. Before he worked for QDMA, Kip was the deer project leader for New Hampshire Fish & Game. Kip was involved in many annual winter surveys looking at wintering areas and deer mortality.

“A deer has to eat a new food for one to two weeks before it can start pulling in nutrients from that food,” Kip told me. “This is because it takes time for the micro-flora – the bacteria that live in the deer’s gut and help with digestion – to adjust and become capable of dealing with the new food source. The best thing you can do during March, if conditions are severe, is to give deer more food of similar quality to what they’ve already been eating throughout winter, and that’s woody browse.” 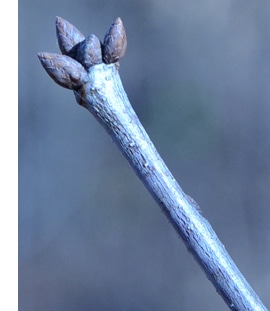 How to Provide that Winter Feed

This means breaking out the chainsaw or lopping shears and putting more buds and twigs within reach of deer (like the buds on a twig end seen in the photo on the right). By late winter, especially in a tough winter like we’ve seen in 2014, much of the reachable browse may be gone. Use hinge-cutting to drop branched trees and shrubs within reach of deer.

“Do any type of TSI (timber stand improvement) where you’re putting those buds at ground level where deer can consume them,” Kip said. “Some of the better species to cut are trees like red maple and yellow birch, but the species is less important than the quantity. There’s not a lot of difference in the nutritional quality of the buds and twigs by species. Quantity is more important.”

Of course, hinge-cutting and TSI can also help enhance the quality of deer habitat in the long run, producing more browse and cover at ground level for future winters.

Also, if you grow apple trees or maybe ornamentals in your yard that require pruning, leave the pruned limbs in piles where deer can reach them.

Below is a short video I filmed showing an experiment with honeysuckle and a trail-camera. Watch to see how quickly deer found the newly available browse.

When you head out with your chainsaw, do your best to avoid going into known bedding or yarding areas, where you might disturb bedded deer.

“If weather conditions remain severe in March, don’t go into cover to look for shed antlers or do habitat work,” said Kip. “Deer are counting on their fat reserves, which are running low by March. Don’t make them waste any additional energy running to escape from you.”

What NOT to Feed Deer in Winter

If you haven’t already been providing supplemental feed, don’t introduce it suddenly in large amounts in late winter.

“The worst thing we can do for deer in a tough winter is shock their system by providing a new food, particularly a high-energy food such as corn or high-protein food such as alfalfa hay that they are not used to,” said Kip. “In most cases, it ends up being worse for the deer than if they had not been fed. The benefits of supplemental feeding come from long-term feeding, not from a short-term food supply when deer are already in poor condition. So, if you’ve been providing supplemental feed, continue to do so. If you have not been, do not start now.”

If you can’t supply woody browse, and you feel you have no other option but to provide a new food source, introduce it slowly, in tiny amounts, at multiple sites scattered across the landscape. Give deer time to adjust over a period of two or more weeks before providing unlimited amounts of feed for deer to consume.

“It comes down to how poor their condition is when they are exposed to the new food and how much of that food they get,” said Kip. “The worse shape they are in when they receive the food, the more likely they are to die from it. Lots of studies have shown this.”

If you do provide supplemental feed, provide it at as many locations as possible rather than at one or two sites to avoid creating concentration points that predators, like coyotes, will use to their advantage.

“Deer are in the poorest condition all year in March, and they are easier prey for coyotes,” said Kip. “In our winter surveys in New Hampshire, we often found increased coyote predation around feeding sites. These sites were funneling a lot of deer into a small area and making them easier for coyotes to kill.”

If you’re concerned about deer survival in this year’s tough winter conditions, the best thing you can do to help them get through the critical last days of March is break out the chainsaw and provide more of the food they are adapted to eat in winter: woody browse.

Meanwhile, let’s all hope and pray for an early spring. The deer, and deer hunters, need it badly this year!

The post What to Feed Deer in Winter | And What NOT to Feed! appeared first on National Deer Association.